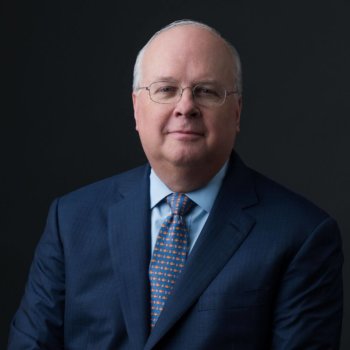 Karl Rove, an iconic political strategist and one of the most sought-after political pundits of our time, is best known for his provocative and robust knowledge of the major political issues of the day.

Rove was described by author and columnist Michael Barone in U.S. News & World Report as “…unique…no Presidential appointee has ever had such a strong influence on politics and policy, and none is likely to do so again anytime soon.” The Late David Broder, iconic Washington Post Pulitzer Prize-winning reporter wrote that Rove was a master political strategist whose “game has always been long term…and he plays it with an intensity and attention to detail that few can match.” Fred Barnes, Washington Examiner columnist and Fox News commentator, called him “the greatest political mind of his generation and probably of any generation… He knows history, understands the moods of the public, and is a visionary on matters of public policy.”

Before Karl Rove became known as “The Architect” of President Bush’s 2000 and 2004 campaigns, he was president of Karl Rove + Company, an Austin-based public affairs firm that worked for Republican candidates, non-partisan causes, and non-profit groups. His clients included over 75 Republican U.S. Senate, Congressional, and gubernatorial candidates in 24 states, as well as the Moderate Party of Sweden.

Mr. Rove writes a weekly op-ed for the Wall Street Journal, appears frequently on the Fox News Channel, and is the author of the New York Times best seller, Courage and Consequence. His latest book is The Triumph of William McKinley: Why the Election of 1896 Still Matters.

A Colorado native, Rove lives in Austin, Texas, where he recently taught an honors course at the University of Texas at Austin and serves on the Texas State History Museum and McDonald Observatory boards.