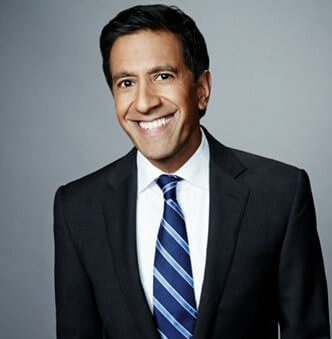 Dr. Sanjay Gupta is the multiple Emmy®-award winning chief medical correspondent for CNN. Gupta, a practicing neurosurgeon, plays an integral role in CNN’s reporting on health and medical news for all of CNN’s shows domestically and internationally, and regularly contributes to CNN.com.

Since 2001, Gupta has covered some of the most important health stories in the United States and around the world. On March 9, 2020, Gupta penned an op-ed announcing the network would refer to the novel coronavirus outbreak as a “pandemic,” ahead of both the WHO and the CDC. Throughout 2020 into 2021, Gupta reaffirmed his role as a trusted guide to viewers worldwide on navigating between facts and fiction surrounding Covid-19 and the pandemic.

A few months after joining CNN, Gupta reported from New York following the 9/11 terror attacks. That fall, he broke several stories regarding the anthrax attacks. In 2003, he embedded with the US Navy’s “Devil Docs” medical unit, reporting from Iraq and Kuwait as the unit traveled to Baghdad. He provided live coverage of the first battlefield operation performed during the war, and performed life-saving brain surgery five times in a desert operating room. In 2004, Gupta was sent to Sri Lanka to cover the tsunami that claimed more than 155,000 lives in Southeast Asia, contributing to the 2005 Alfred I. duPont-Columbia University Award for CNN.

In 2005, Gupta contributed to CNN’s Peabody Award-winning coverage of Hurricane Katrina, revealing that official reports that Charity Hospital in New Orleans had been evacuated were inaccurate. His “Charity Hospital” coverage for Anderson Cooper 360° resulted in his 2006 News & Documentary Emmy® for Outstanding Feature Story. That year, he also covered the Lebanon War. In 2007 and 2008, Gupta and Anderson Cooper co-hosted the global film series “Planet in Peril,” which examined the impact of climate change all over the world.

In 2009, Gupta embedded with the US Army’s 82nd Airborne, accompanying them on life-saving rescue missions in Afghanistan. In 2010, Gupta reported on the devastating earthquake in Haiti, for which he was awarded two Emmy® awards. His distinctive reporting in 2010 also included live coverage on the unprecedented flooding in Pakistan. He also contributed to the network’s 2010 Peabody Award-winning coverage of the oil disaster in the Gulf of Mexico. In 2011, Gupta reported from earthquake- and tsunami- ravaged Japan, adding clarity and context to the human impact and radiation concerns.

During the rollout of Healthcare.gov in 2013, millions experienced glitches in the online portal. Gupta spoke exclusively with HHS Secretary Kathleen Sebelius about the magnitude of the botched website launch, for which she took responsibility.

In 2014, he was the first western reporter who traveled to Conakry, Guinea, to investigate the deadly Ebola outbreak that would soon find its way to the United States for the first time in history. When a major earthquake hit Nepal in 2015, Gupta flew into Kathmandu to cover the aftermath. In 2016, Gupta told the exclusive story of the separation of craniopagus twins Jadon and Anias McDonald in the Emmy® award-winning documentary “Separated: Saving the Twins.” Gupta extensively covered the Flint, Michigan, water crisis and Pulse nightclub shooting in Orlando. That same year, he moderated a panel with President Barack Obama on the opioid crisis.

In 2017, Gupta reported from the frontlines of a breakdown in the medical infrastructure of Puerto Rico, which was devastated by Hurricane Maria. He also broke the news about Sen. John McCain’s diagnosis with brain cancer. In 2018, Gupta cohosted “Finding Hope: Battling America’s Suicide Crisis,” for which he won another Emmy award.

Over the last few years, Gupta has increasingly focused on long-form reporting. He is the host of the CNN Original Series “Chasing Life with Dr. Sanjay Gupta,” which follows Gupta’s travels around the world in search of the secret to living longer, healthier and happier. Gupta also stars in the HBO Original Documentary “One Nation Under Stress,” which examines why life expectancy is declining in the United States. His enterprise reporting on medical marijuana has led to five documentary films, “Weed,” which were awarded the Alfred I. duPont-Columbia University Award.

In addition to his work for CNN, Gupta is an associate professor of neurosurgery at Emory University Hospital and associate chief of neurosurgery at Grady Memorial Hospital in Atlanta. He serves as a diplomate of the American Board of Neurosurgery. In 2019, Gupta was elected to the National Academy of Medicine, considered one of the highest honors in the medical field.

Gupta contributes to the CBS newsmagazine “60 Minutes” and serves as an executive producer for the HBO Documentary Unit. He is the author of three New York Times best-selling books, “Chasing Life” (2007), “Cheating Death” (2009) and “Monday Mornings” (2012). Dr. Gupta published two books in 2021: “Keep Sharp: Build a Better Brain at Any Age” (January 2021) and “World War C: Lessons from the Covid-19 Pandemic and How to Prepare for the Next One” (October 2021). Gupta co-founded the LIFE ITSELF conference with Marc Hodosh of TEDMED. The four-day live conference will take place in spring 2022, featuring extraordinary thinkers intersecting health & medicine—from research, technology, government, entertainment, and business.

Gupta has been named one of PEOPLE magazine’s “Sexiest Men Alive,” a “pop culture icon” by USA Today. And one of the “Ten Most Influential Celebrities” by Forbes Magazine. He has won several awards for his humanitarian efforts and the John F. Kennedy University Laureate award. Gupta has also received numerous honorary degrees and delivered a commencement address in the “Big House” at his alma mater in Ann Arbor, Michigan.